Although the knee’s only job is to bend and straighten the leg, it requires a vast collection of bones, muscles, tendons and cartilage to pull off this simple feat. And because it’s designed to stick to such a rigid path of movement, any little tweak puts all of those moving parts at risk for injury.

The anterior cruciate ligament (ACL) is an especially delicate piece of hardware. The ligament, which runs through the center of the knee and ensures that the thigh tracks properly with the shin bones, is highly susceptible to rips and tears. 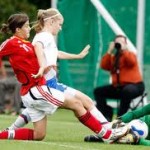 ACLs attached to female knees are particularly prone to injury. Robert Marx, M.D., a professor of orthopedic surgery at the Hospital for Special Surgery and Weill Cornell Medical Center in New York City, notes that women are approximately two to six times more likely to tear the ACL than men. That’s why, despite the fact that fewer women are active in high-risk sports such as soccer, basketball and hockey, they account for half of the 200,000 ACL surgeries performed in the U.S. each year.

Dr. Marx also points out that it’s not just female team players who put their ACLs in harm’s way. “Any activity that involves sudden stops, jumping and pivoting ups the chances of ACL injury,” he states. “Skiing, boot camps and kickboxing classes can all lead to ACL injuries.”

So why are women getting the shaft? There are several reasons. For one, women have wider hips, which places greater pressure on the inside of the knee. Marx says that some research indicates that estrogen and other female hormones may create a laxity, or looseness, in the joints that renders their knees less stable. Many women also love high heels, much to the detriment of the ACL. High heels throw the body into a forward position creating undue pressure on the knees and forcing the ACL to work overtime.

Now for the good news. Trashing your ACL is not inevitable even if you’re a woman who’s super active in a high-risk activity. One American Journal of Sports Medicine study found that performing a regular regimen of knee exercises that bolster the knee’s strength, stability and biomechanics of the joint reduced ACL injuries in women by more than 40 percent.

Ready to protect your precious knees? This four-move “healthy knee” program is taken from Marx’s new book, “The ACL Solution: Prevention and Recovery for Sports’ Most Devastating Knee Injury.” Do one to three sets of each exercise, eight to 15 repetitions per set. Use it as a warm up to any workout at least three times a week and despite your gender, your benders will be ready to rock.

One Leg Balance According to Marx, balance exercises such as this One Leg Squat move teach you to avoid dropping your knees inward, which exacerbates the angle between the knee and the hip, placing the ACL at greater risk.

Stand tall with your feet hip-width apart and hands on your hips. Lift left foot off the floor a few inches and balance all of your weight on your leg. Slowly bend right knee down two to three inches, taking care to keep the knee facing forward. Don’t allow the knee to shoot out past your toes or drop inward. Hold the bottom point of the movement briefly, then return to the start. Switch legs to complete the set. To make it harder, Marx suggest closing your eyes as you squat or do the move in your bare feet while standing on carpet.

Plank Marx says that strengthening all of the support muscles of the knees, hips and core helps the knee remain in a stable and safe position as you move, especially when you stop short or suddenly change direction.

Kneel on the floor, then straighten your legs and lift them up off the floor so that you are balanced on forearms and toes. Clasp hands together. Align spine and pull abs in so lower back does not sag and the butt does not stick up. Hold this position for 10 to 60 seconds. Focus on keeping the core tight and the torso straight the entire time.

Plyo Jumps Quick jumps and hops are known as plyometrics. Marx says moves like these side-to-side plyo jumps build explosive strength and train the knee to land properly—both skills that reduce the chances of sudden trauma to the ACL.

Stand tall with feet hip-width apart, hands on hips or out to sides for balance. Shift weight onto right leg and lift left foot off the floor. Push off the right leg and jump a stride-length to the left. Land softly and quietly on the ball of your left foot, slightly bending the knee and hips to absorb the impact. Immediately jump back to the right. Continue jumping side to side to complete the set.

Cut-and-Run Running drills are an essential part of any knee health program because they train the knee to move properly during activities that involve a lot of stop-and-go, twists and turns. This Cut-and-Run drill is especially useful for cultivating good biomechanics.

Jog four to five steps then plant your right foot to make a hard “cut,” changing direction and accelerating so that you are now running 90 degrees form your original direction. Run 4 to 5 steps before slowing down, cutting and changing direction again. As you cut, power the movement from your hips and concentrate on keeping knees over toes and avoid dropping your knees inward. Maintain a strong core and good posture throughout.