Home » Expert Advice » What is Shingles and How Can it Be Treated?

Shingles is one form of an infection with a virus called varicella-zoster. Shingles is also known as “herpes zoster,” because the virus belongs to the herpes virus family. The virus that causes shingles is not the same virus that causes the sexually transmitted infection genital herpes. This virus is also the cause of the disease chicken pox, which is usually contracted in childhood but can be contracted at any age. After a person has been infected with the varicella-zoster virus and recovered from the primary infection, the virus can enter a state of dormancy. In its dormant state, the virus remains present in nerves. In some cases, the virus may come back out of dormancy and cause the symptoms of shingles. 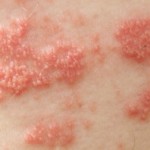 Shingles occurs in people who have been infected with the varicella-zoster virus and previously contracted chicken pox. Occasionally, shingles can also occur in people who have received chicken pox immunizations and never became ill with the chicken pox. Those who have not been infected or been vaccinated against the chicken pox can catch the virus from an infectious person, but they will develop a case of chicken pox, not shingles. Shingles infections are far more prevalent in older individuals, usually over the age of 60. However, in some cases the virus can come out of dormancy and cause shingles in younger individuals. People who had chicken pox as infants younger than 1 year of age are more likely to develop shingles than those who had chicken pox as older children.

The shingles infection does not usually cause a seriously threatening illness, but it can cause severe nerve pain. The first sign of shingles, before rashes or blisters appear on the skin, is nerve pain. The most common place for this pain to occur is on one side of the trunk of the body in a small area that wraps around from the back to the front. Tingling or burning pain may be experienced before the rash appears. The rash starts as a red, flat rash that then forms blisters that break and form a crust. While the blisters are oozing, they are contagious and you can transmit the chicken pox to people who have never been exposed to the varicella-zoster virus.

Aside from the characteristic painful blistering rash, a person may also have a fever, feel generally ill, be fatigued and have headaches when they are suffering from a shingles outbreak. In uncommon cases where a nerve in the face is affected, additional problems can occur, such as difficulty with moving certain facial muscles and paralysis of the eyelid. Shingles takes a few weeks to completely heal. It is very rare for a shingles infection to occur more than once, but it is not impossible.

Non-Surgical Orthopaedics, P.C. specializes in pain management and Shingles is one of the conditions that we treat. Call 770-421-1420 for an appointment today.